Protocols for a safe return to Church
Weekly News Update

Taney Parish Primary School is a co-educational national school.  It is also the parish school of the Church of Ireland parish of Taney, here in Dundrum.

There are 23 teachers and 417 pupils in Taney School in a double stream school with two classes at each level from Junior Infants to 6th Class.  The school partakes in a wide range of activities including Green School and Active Flag activities - all of these can be seen in more detail on our website www.taneyschool.ie

The school is above all a happy school where pupils enjoy coming each morning - a caring community of adults and children, where each is valued for their own unique contribution and effort.  Taney School has a long tradition of providing the widest range of opportunities for children from the arts to sport and crucially and centrally in the academic area.

The Church of Ireland is a province of the Christian Anglican Communion. Christianity

is the world's largest religion, with upwards of 2 billion followers on every continent. It is based on the teachings of Jesus Christ who lived in the Holy Land 2,000 years ago.

What is Anglicanism? Anglicanism is one of the traditions, or expressions, of this Christian faith. Other Christian traditions include Roman Catholic, Eastern Orthodox, Oriental Orthodox and Protestant Churches, which include Lutheran, Baptist, and Pentecostal Churches. The word Anglican originates in ecclesia anglicana, a medieval Latin phrase dating to at least 1246 that means the English Church, but in the past two centuries the tradition has been adopted around the world. Now 85 million members are part of national or regional Churches that call themselves Anglican (or Episcopal in some countries) which collectively are known as the Anglican Communion.

Anglicans and Episcopalians the world over share aspects of their history, tradition and ways of worshipping. But no two churches are exactly alike even within a diocese, let alone a province or between countries. This unity in diversity is one of the things that make the Anglican Communion so special and such rich ground from which to change to world.

The Church of Ireland, as an authentic part of the universal church of God, is called to develop growing communities of faith, in and through which the Kingdom of God is made known, and in which the whole people serve together as followers of Jesus Christ for the good of the world to the Glory of God.

In the power of the Spirit, our mission requires us to order our contemporary worship and life in a manner that nurtures growth, promotes unity and liberates us for service in the world that is God’s. 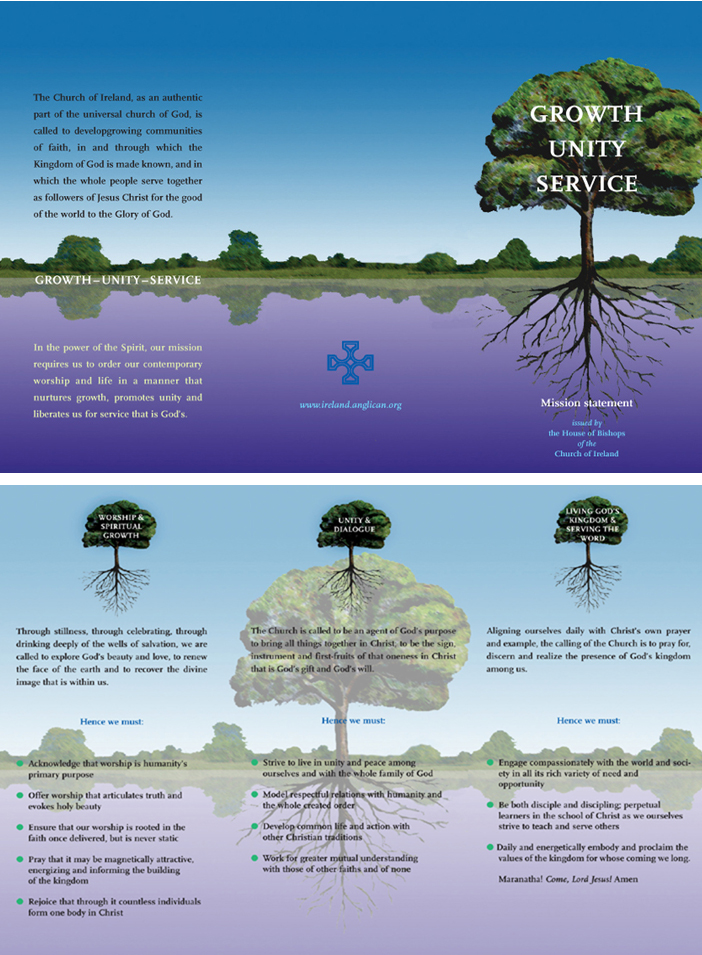